What Do My Pink Lawyer, Rachael Ray & Adriene Mishler Have in Common?

So, I have another embarrassing confession to make.

I’ve turned into a fan girl.

No, not a groupie of some super hunk or famous rock star [insert your favorite pick here].

I’ve become a cult follower of Adriene Mishler, along with 7 million other viewers, the yoga guru on the highly popular YouTube channel, “Yoga With Adriene.”

It’s all my daughter’s fault actually. 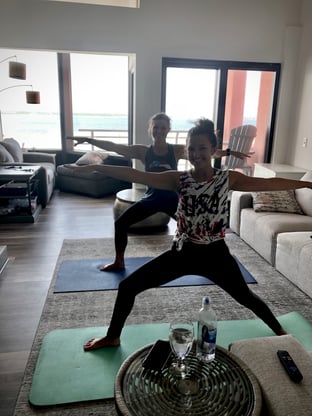 While I was finishing up my 30 run streak in early April, Jill was working her way through her first 30 day yoga challenge with one of Adriene’s 30 day themed series. She asked me to join her for a yoga session one weekend afternoon and, not wanting to turn down an invitation to hang with my daughter, heartily agreed.

That was it. I was hooked. Despite my inflexibility, I became excited to finish my 30 day run streak (hey, I committed to it so I had to finish it, right?!) so I could begin my own 30 yoga run (no pun intended).

I’m on day 40 now and I’ve not looked back. In fact, I’m kind of embarrassed to say that my running has fallen by the wayside. I’ve run twice with Crazy Amy since my yoga fixation began.

Surprisingly, though I’m not complaining by any means, in addition to my increased flexibility, I’ve become leaner and stronger through my daily (twice daily on the weekends) yoga practice.

I’ve tried yoga here and there in the past and although I didn’t mind it, I was often left floundering during a class. Either the instructors moved too fast or they didn’t explain the transitions well. The focus seemed to be on hitting the perfect pose and look good doing it.

What I find refreshing about Yoga With Adriene is that she wants you to “find what feels good” in your yoga practice. She offers variations in her movements, clear explanations that can be followed without watching her on the video, and she sprinkles in a healthy dose of mindfulness and gentle, loving gratitude. She wants you to feel good with yourself. Plus, she’s quirky as heck (a girl after my own heart) and her adorable dog, Benji, often makes his cameo in her videos.

In a post-prison stint interview, Martha Stewart haughtily professed that she was a better chef than Rachael Ray. Rather than rising to the bait, Rachael Ray agreed that the claim may be true, and I paraphrase here, but that she was a cook for the common, busy woman with recipes that taste delicious and are easy to prepare. Rachael’s niche has never been to cater to the highly cultured foodie who enjoys spending hours meticulously preparing the perfect culinary delight for her guests. In other words, Rachael Ray’s audience is not Martha Stewart’s audience.

Similarly, I’ve come to think of Adriene Mishler as the Rachael Ray of the yogi world. She appeals to the common woman (not just to the long, lean women of super human flexibility) and she genuinely appears to love teaching and sharing her yoga practice with her worldwide audience.

Adriene is effective in her teaching, she keeps it simple, and she’s fun to spend 30-60 minutes every morning with.

Come to think about it, My Pink Lawyer® has a lot in common with both Rachael Ray and Adriene Mishler too. We’ve been told by our clients that our lawyers and staff are genuine, friendly and down to earth. We love teaching others about the importance of planning their affairs and helping them do so in a simple yet effective manner without getting “too fancy” in our recommendations.

Let’s face it, with the majority of Americans having no written estate plan at all, most folks don’t need to dive in with the Martha Stewart equivalent of an estate plan. A Rachael Ray styled estate plan is going to do you just fine without breaking the bank.

If you want to have a brief chat with one of our attorneys to see if we might be a good fit before scheduling a more formal estate planning consultation, our office is now offering free 10 minute exploratory phone calls. Click below to email us to let us know you are interested.

I’ve now started my second 30 day yoga series with Adriene (yes, we’re on a first name basis now). Martha Stewart she may not be, but that’s not stopping this fan girl from tuning in every morning to see what she’s “cooking up” for me.

P.S. It’s the last week to vote for Best in Pensacola. If you dig us, please vote for us here!