What Banana Are You Holding Onto?

One day villagers in a far-off land wanted to capture the monkeys who were eating all of their crops. One ingenious villager thought of cutting a hole in a coconut and stuffing a banana inside of it. Then she placed the coconut in a nearby tree visited by the monkeys. 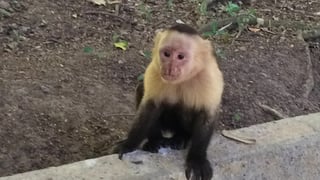 A common "banana" in people's lives is their "stuff."

Despite the justification that one's "stuff" is all very meaningful, practical, or sentimental, clutter is an insidious banana that, in my humble opinion, should be released for several reasons.

First, visual clutter is distracting and even stressful to many people, including me. It is very difficult to truly relax and enjoy my surroundings when I'm looking at a bunch of "stuff." When I do take the time to declutter, a weight is lifted and I feel an immense sense of freedom.

Speaking of freedom, your stuff severely limits it. I know many people who dream about moving or downsizing but do not (or cannot) because the thought of having to deal with all of their stuff is paralyzing. So they do nothing and stay stuck someplace they'd rather no longer live.

Finally, as much as your "stuff" is important to you, your children could probably care less about it. Further, your "stuff" eventually needs to be disposed of by your family when you are no longer here.

Having purged one family member's home after they died, I can tell you first hand that it ain't fun cleaning up someone else's mess. (Sorry if that sounds harsh.) I know I hold an extreme position on this subject, but in my opinion, it's downright selfish to hold onto stuff you do not need nor holds sentimental value to you (and no, you cannot say that everything you own holds sentimental value). All you are doing is kicking the can down the road for someone else to deal with your clutter.

I struggle with my own clutter too so I'm not casting stones here. Just calling it like I see it and clutter is one big hairy banana in my life.

So let me ask you.

What banana are YOU holding onto?

P.S.The fifth annual Power of E3 Women's Conference will be taking place on April 28th to benefit women in need of healthcare. For more information and to purchase tickets, visit www.PowerofE3.com.

It's not too late to take advantage of our discounted Family Succession Strategy Sessions this week. Call the office and mention this email to reserve your strategy session for only $97 (1/2 price). Offer expires tomorrow, March 23rd.