“No problem, sir. They are holding the plane for you. You’ll have to run, however. The plane is already on the runway,” the affable Flamingo Airlines clerk in the Nassau airport cheerily informed my husband.

Andrew and my son sprinted across the airport, out the door and onto the tarmac.

Several puddle jumper planes were already on the runway idling for takeoff.

They ran to the closest one where a middle-aged Bahamian gentleman was loading luggage into the cargo hold of a small-prop plane.

“Excuse me. Is this the flight to Staniel Cay?,” my husband asked.

“No, no. That flight is on the other side of the runway. Are you the two people they are holding the plane for?” 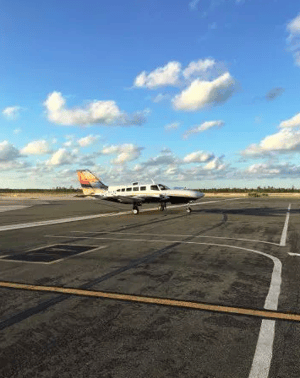 “Yes, thank you. We’ll run over there now to see if we can still catch them,” Andrew replied, catching his breath. He saw that the propellers were going on that plane and everyone was already seated inside.

“No worries. Hold on. I will take you there after I finish loading these bags. They are not taking off. I am the pilot!,” the “baggage handler” flashed a wide grin.

“Do you have any luggage with you?”

“Unfortunately, it is still stuck in Atlanta but it is supposed to arrive on the next flight to Nassau.”

“No worries. It happens often. I will make sure your bags are personally delivered to you.”

The pilot loaded the last bag and the three of them hopped into his pick-up truck and drove across the tarmac to the other Flamingo Airlines flight bound for Staniel Cay.

The pilot opened the door and my boys stepped inside. You could almost read the minds of the other passengers. “So these are the bozos for whom they held this flight for ninety minutes.”

Andrew and my son left Saturday morning at the crack of dawn for a week long fishing vacation in the Bahamas. Guess they figured since I am headed to Colorado later this week, that this would be a good time for them to sneak off for a little fun themselves.

Despite the thorough planning and preparation that went into packing and preparing for the fishing trip (weeks of organizing fishing lures and tackle, marine navigational charts, borrowing a satellite phone for emergencies on the water, etc.), Mother Nature almost derailed my boys’ trip on Saturday.

Major thunderstorms in Atlanta delayed their flight and they sat on the runway for over three and a half hours in Pensacola.

Once they did arrive in Atlanta, they had to sprint to their next flight bound for Nassau across several terminals. Fortunately, that flight was also delayed because of the weather so they made the flight. Their bags did not.

And so it goes in life.

Even the best laid plans can get derailed. The key is to remain flexible and build in contingencies.

Just like we do in crafting Family Succession Plans for clients. We build in flexibility to account for the contingencies in life.

My husband and son finally made it to Staniel Cay and received a call late Saturday night that their luggage, and most importantly, their fishing gear, had arrived in Nassau and would be delivered to them the following day.

None too soon either since they had already rented a 19 foot skiff to fish for the week.

Fingers crossed that they do not have any more ill-fated “adventures” to share from the water!