“Ok,” I thought. Guess she must be bored if she went out of her way to tell me she was watching television.

“I’m getting ready for my race,” I replied.

Thumbs up, then “I am watching the wedding.”

My brows furrowed in thought and then I remembered.

Prince Harry’s and Meghan Markle’s wedding was this morning! Ah, what the heck, I flipped on the television. 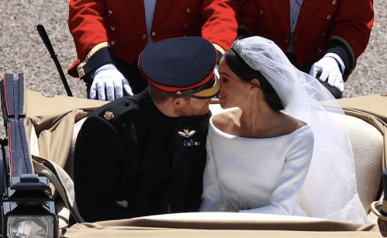 I need not have wondered what channel the wedding was on since at 6:00 in the morning, it was on every station.

I must admit that I’m not much of a romantic nor a sentimentalist. And I hadn’t followed the hoopla surrounding the royal wedding.

But, knowing that it was streaming live on tv, I couldn’t help but tune in Saturday morning as I prepared for the Leftover 4 Miler race on Pensacola Beach.

Our Pikes Peak training schedule called for eight miles on Saturday. Turns out that I live two miles from the starting line of the race so I planned to run there, then run the race, then run home again.

Since I wasn’t able to catch the entire wedding ceremony live, I actually watched the replay Saturday afternoon as I attempted chores around the house.

As I said, I am not a romantic, but even I got a little verklempt watching Harry and Meghan exchange their vows and stealing sly glances and smiles at one another.

Of course weddings are an exciting highlight in most people’s lives. Many newlyweds, however, get swept up in the romance and forget that marriage is a legal contract between two people.

Besides the excitement of the day, marriage also brings legal responsibilities that should be addressed in one’s Family Succession Planning.

For example, surviving spouses are guaranteed inheritance rights of their deceased spouse in Florida. An elective share of 30% of your estate, plus guaranteed homestead rights, a family allowance and an exempt property allowance just to name a few such rights.

Such guaranteed inheritance rights are not necessarily a big deal for young, first marriage brides and grooms since such newlyweds often intend to leave everything to each other upon their death anyway and they may not be starting off their married life with much in the way of net worth.

However, for blended families where there are children by a prior relationship or where one spouse has substantially more wealth than their spouse, these guaranteed inheritance rights can quickly become a huge headache for surviving loved ones.

Further, if Family Succession Plans are not updated and re-executed after a marriage (or sometimes even after the birth of a new child) with the new spouse specifically referenced in the plan, that surviving spouse is guaranteed a share of their deceased spouse’s estate equal to the amount they would have inherited had their deceased spouse had no plan at all (either all estate assets or half of the estate assets depending on whether there are children by a prior marriage).

Again, this guaranteed inheritance right of a surviving spouse can throw a huge monkey wrench in planning for your children by a prior marriage.

Of course these surviving spousal rights can be waived in a marital agreement between the bride and groom, either before or even after the marriage.

If you’ve not updated your estate plan after a marriage or the birth of a child, you might want to do so now to ensure that your desired beneficiaries actually will inherit your money and assets in the future.

You can schedule your Family Succession Strategy Session with our office online here or by calling our client concierge, Olivia, at the office: 850-439-1191.

I finally had to turn off the television on Saturday as I found myself glued to the tube instead of finishing my chores like I had planned. I will chalk up my Saturday afternoon to indulging in a little guilty pleasure of royal watching.

P.S. Although it was bloody hot on the beach on Saturday morning, I surprised myself by placing 1st in my age group at the Leftover 4 Miler. The “leftover” glass mug trophy was an unexpected surprise but you should have seen me gently cradling it in the crook of my arm like a baby on my two mile jog home!