I Always Suspected We Were a Little Crazy. This Confirms It. 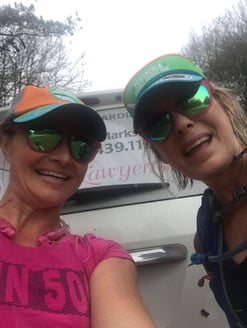 Another text from Crazy Amy. This time with a link to a 50K Ultra Trail race this summer in Colorado Springs.

Never mind that we had already agreed months ago that we wouldn’t mention a possible second 50K race until at least a week after our first one.

But we felt so good on our last trail run (granted, it was “only” as 12 mile taper run) that we started talking about a destination race this summer.

Crazy, right? We haven’t even finished our FIRST 50K race yet (which is this Saturday) and here we are daydreaming about a “fun” vacation running in some exotic location.

Well, Colorado may not be exotic to you but it is for us, especially since we’ve never run in the mountains before.

Oh, what the heck. I replied back asking if she was serious.

Her reply? A resounding “Heck yeah!”

A quick peak at the calendar and we took the plunge. We registered for our 2nd 50K trail race, the Pikes Peak Ultra the last weekend of July.

Once the registration, air fares, hotel & rental car was booked, reality slowly started to sink in.

What have we done?

I made the “mistake” of posting about our adventure on an ultra trail running Facebook group asking for training suggestions since we live in relatively flat Florida.

Some of the reply comments flabbergasted us.

Most people were very encouraging, though you could tell they thought we were very naïve.

Some folks, however, were downright snarky in their responses.

“You really should read the race details before registering.”

“Pretty ambitious for a newbie.”

Well, excuse me but shall I remind you that nothing fires us up more than someone even suggesting that we can’t do something?

Oh, our poor husbands. They are such good sports and would never voice their true thoughts out loud that we really are crazy!

Well, it’s done and we will be there come hell or high water.

The snarky comments remind me of clients (especially women) who tell me stories of past attorneys they’ve visited who either would not talk to them and would only address their husbands or who were made to feel silly because of some of the questions they were asking.

It’s hard for me to believe that really happens but I’ve heard enough stories from different people over the years to know it must still happen.

Well, you’ll never have to worry about that with us. We welcome all questions and want our clients to make well-informed decisions in the designing of their Family Succession Plans.

Regardless of how our Pikes Peak race goes, I have no doubt we are in for a big adventure.

I told Crazy Amy that we will be like Thelma & Louise, though hopefully not with the same ending!