God, I Hate it when my body lets me down 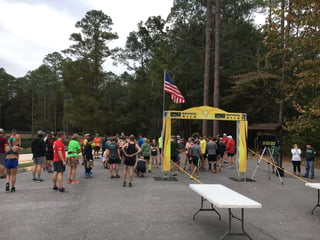 Starting line of the 2016 Blackwater Half Marathon Trail race

“Holy shit,” I thought. What the hell is happening to my calves?

They had completely seized up and I could barely move.

How about a ginger tiptoe? Yup, that’s about the best I can do.

I was at mile 9 of the Blackwater Half Marathon Trail Race last November.

I limped the last four miles as every jogger and walker passed me.

I finished an hour after the awards ceremony.

Good thing I didn’t get eaten by a bear out there. If it weren’t for my friend and racing buddy waiting for me at the finish line, no one would’ve even known I was still out there. 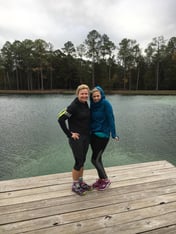 So much for winging it, I thought.

After some reflection, I concluded that I had become severely dehydrated following copious amounts of Sudafed ingested for my rotten sinuses leading up to the race. The dehydration led to the severe leg cramps.

Never one to let a humiliating defeat keep me down, I immediately recommitted to race again this year.

Even though I now knew what stymied me last time, I decided maybe “winging it” is not the best way to prepare for two hours (well, three hours in my case) in the woods.

I hate to just go out and run. But I knew that some regular training and preparation on my part would be crucial to my upcoming redemption.

I signed up for a Half Marathon training through Running Wild and committed to group training twice a week.

I recently updated a client’s Living Will and health care power of attorney before her surgery. She’s not expecting anything to go wrong but it’s better to be safe than sorry.

That’s my motto in training for this year’s Blackwater Half Marathon trail race. Better to be safe than sorry which is why I’m actually training in advance to work up my mileage.

I’m sure nothing will go wrong this year but if it does, as least I’ll be better prepared.

Kristen “No More Tiptoeing Through the Woods” Marks

P.S. I am giving away 10 FREE "Five Wishes" Living Wills to Florida residents. Simply update your contact information by clicking the button below, then leave a comment below telling me you did so, and I'll pop that baby in the mail to you lickety split.