Don't Be a Lemming and Jump off the (proverbial) cliff just because everyone else is doing it!

This is not good. I think we’re going the wrong way, I thought to myself. 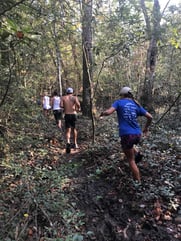 My view in the woods at the Blackwater Half Marathon

When I saw Bear Lake at the bottom of the hill, I finally gave into my nagging feeling and stopped to pull up Google Maps on my phone. Zooming in (a lot since I didn’t have my reading glasses!), my heart sunk.

Yup, we missed the turn for the Bear Lake BIKE trail, the OUTER loop around Bear Lake. We were instead headed to the Bear Lake hiking trail, a much short inner trail directly around the lake.

As much as I hated to do it, I turned around and started heading back up the hill. Man, the only thing worse than running uphill is realizing you are running uphill because of your own stupid mistake.

“What are you doing? Are you ok?,” the runners asked me as I passed them running the other way. I told them that I thought we had taken a wrong turn. Despite my warning, everyone at that moment (except for one woman) kept running down the hill.

I was either going to be right and there would be a whole lot of disqualified runners.

Or I was going to be very wrong and I would be the one disqualified, plus the one running an extra two miles or more in the woods.

It was a long, lonely trek back to the top of the hill.

When I finally arrived a mile later, I saw other runners emerging from the woods and taking another trail on the other side of the fire road.

My suspicions confirmed, I still didn’t feel much better since I had been making great time and had just lost 20 minutes or more.

I had a guy pass me about 30 minutes after the “detour” and he thanked me for telling everyone they were going the wrong way.

Aha! So at least the runners behind me on the hill finally turned around even though they hadn’t believed me at first. I get it. No one wants to admit they made a 2 mile mistake.

Can you find my detour?

I wasn’t mad at the organizers of the race nor at the runners in front of me for the missed turn. Maybe that particular turn could’ve been better marked but, when push comes to shove, I should’ve been paying attention to the course and not blindly following the crowd.

One of the life lessons I’ve tried to instill in my kids (and myself) is to always take personal responsibility for your actions.

Just like you and I should take personal responsibility for the plans we choose to make, or not make, for our loved ones when we die or become incapacitated.

Failing to plan for our family has much dire consequences than getting lost in the woods or being disqualified from a race.

If you haven’t implemented a Family Succession Plan yet for your loved ones and you are reading this email, there is still time to about-face and remedy that situation. Reach out to us and we’ll show you how to get started.

I ended up finishing 5th in my age group, shaving 30 minutes off of my time from last year, PLUS adding an additional 2 miles to the race. Ha!

Looking at everyone’s times, I would’ve place 3rd in my age group without the detour, but hey, there’s always next year!

Kristen “Getting Lost in the Woods” Marks

P.S. If you have young kids, you may want to check out my latest video on naming the best guardians to raise your kids.

P.P.S. If you have retirement monies, you may want to tune into tomorrow's Facebook Live broadcast on how to protect your retirement money for your kids.