Did I Ever Tell You About the Time I Stole My Neighbor's Cat?

“Honey, are you at home?,” I asked Andrew from my cell phone.

“What are you talking about? Spitball disappeared six months ago.”

“I know. It’s the craziest thing. I’m on my walk and at the end of the street, there’s Spitball sunning herself in someone’s driveway. I knocked on the door but there’s no answer. I need you to pick us up so we can bring her home.”

“Uh. Are you sure it’s Spitball? Don’t you think you should wait until the neighbors return to let them know we’re taking her?”

“Hell, no. She’s our cat. She must’ve wandered off and these guys decided to take her in. The kids will be so excited when they see her.”

Five minutes later, Andrew gets out of his truck and walks over.

“See? I told you it was Spitball!,” I exclaimed excitedly.

So up I scooped our beloved Spitball, my daughter’s black cat, into my arms and hopped into the truck for the short ride home.

We called the shelters. We posted missing cat flyers in the neighborhood. I put out pleas on Facebook.

Spitball had disappeared into thin air.

Sure, neighbors had warned us about coyotes who supposedly lived in the woods across from our house but … 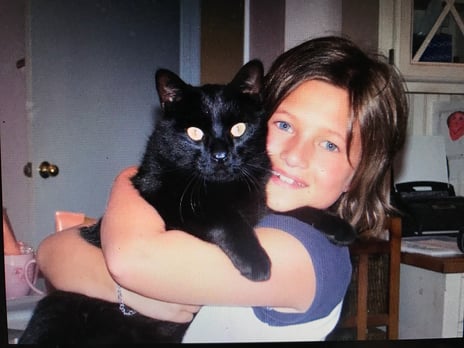 I had given up hope when six months later on my leisurely Sunday morning walk I spotted Spitball in a neighbor’s driveway.

Spitball purred all the way home. She was just as tiny as I remembered though maybe a little filled out. She had obviously been well cared for by the neighbors.

When we got Spitball home, her brother, Bama, the black kitty belonging to my son, came up briefly to sniff her then wandered off.

Huh, I thought. That’s odd. I would’ve thought Bama would have been excited to see his sister again.

I called the kids downstairs from their rooms excitedly.

“Who?!,” they both yelled bolting down the stairs.

“What? Oh My God! Spitball! Where have you been?,” Jill cried.

Jill immediately started cuddling Spitball who was still just as friendly as before her disappearance.

“I don’t think this is Spitball.”

“What are you talking about? Of course it is.”

“Look at her belly. She has a white spot on it.”

I rolled Spitball over and sure enough, there was a quarter sized patch of white fur in the middle of her belly. Our Spitball had been completely black.

My mind raced for a logical explanation.

Maybe the white patch of fur grew there during her disappearance? Never mind that she was full grown when she disappeared.

Maybe she was so scared during her ordeal that some of her fur turned gray? I’d heard about that happening to humans. They get so petrified or are so stressed that their hair turns gray overnight.

Ok, even I knew I was grasping at straws at this point.

Feeling horribly guilty, Jill burst into tears when I told her that I would need to return “Spitball” to the neighbors.

I managed to track down their phone number from a mutual neighbor and left a long, rambling message on their answering machine.

“Hi, you don’t know me but I’m your neighbor and I have your cat. I’ll explain everything when you call me back.”

I thought briefly about just keeping “Spitball” for my daughter. She was a friendly kitty after all. But the thought was fleeting. That wouldn’t be right and what kind of example would I be setting for my kids anyway? That it’s ok to steal from your neighbors?

Several hours later, the neighbors called and I explained my goof. I was very apologetic and offered to bring “Spitball” back to them forthwith.

Jill came with me which, in retrospect, was not a good idea since she was still devastated. It was like losing Spitball all over again.

Taking pity on me, the neighbors offered for Jill to come by anytime to play with “Casper.” [Who names their black cat “Casper” by the way? The neighbors obviously have some sick sense of humor.]

I felt horrible. I hate being wrong but this goof took screwing up to a whole new level for me.

Sometimes we make decisions and act upon inaccurate information even if we have good intentions.

I work with families whose deceased loved ones mistakenly believed they had their affairs in order and that their families would be taken care of.

Unfortunately, without careful planning with an estate planning professional (not just any ole’ lawyer, a Family Succession Planning lawyer), well-intentioned folks often inadvertently screw up their estate planning leading to costly mistakes their children must clean up.

We never did find Spitball. I have a sinking suspicion that she indeed did make a tasty snack for a wild coyote. I just hope she didn’t suffer.

The cats we have now are indoor cats.

So there you have it. You know one of my deepest, darkest secrets—the time I stole my neighbor’s cat.