Charity Spotlight of the Month: Habitat for Humanity

Even if you don’t know what Habitat for Humanity does, there’s a great chance you’ve heard of it. Since its founding in 1976, Habitat has become the largest nonprofit builder in the world and has helped rehabilitate or preserve more than 800,000 homes worldwide. But what is it that makes Habitat for Humanity Pensacola unique?

Melanie Jacobi, director of volunteer services at the Pensacola offices, explains, “We’re so successful because we have a population that is extremely supportive of our community.” She continues, “We’re home to many hardworking families trying to make ends meet and have a community that’s willing to support them with their dollars and time.”

Melanie’s primary job is to coordinate the efforts of the 4,000–5,000 volunteers who work with Habitat Pensacola every year. This is sort of a coming home for Melanie; she grew up in Pensacola and volunteered at Habitat as a teenager. She left for 11 years and, after returning, was delighted to find her current position open.

She says one of her favorite parts of her job is working on the Women Build program, which provides women specifically with the opportunity to learn the skills to build a home. Last fall, over 100 women came together to fundraise for and build a home that was eventually dedicated in an April ceremony. They’re already looking ahead and recruiting volunteers for next fall.

“It’s an interesting opportunity because you take 100 women — most of whom have never met — and they come together to make a family house happen,” says Jacobi. “They start by saying, ‘I don’t know how to fundraise or build a house.’ But they figure it out with some help and do amazing work.”

In the end, there’s one extremely special moment that puts a smile on every volunteer: It’s when the house is completed. Seeing physical, tangible evidence of your work — that image of a real home built for a real family to live in — is a significant moment.

My Pink Lawyer endorses Habitat Pensacola and all the wonderful work they do. If you’d like to join their powerful force of volunteers, email them at volunteers@pensacolahabitat.org.

My Pink Lawyer® will be collecting voluntary donations for Women Who Build (Pensacola Habitat) at our upcoming Women Empowered Workshop on June 8th. Click the image below to reserve your spot. Space is limited. 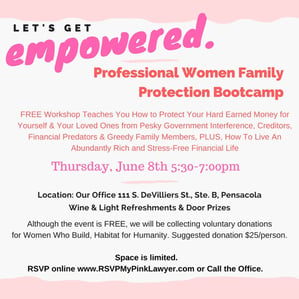